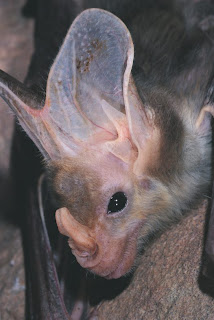 The ghost bat is present in Northern Australia, Western Australia, Queensland, and the Northern Territory. Ghost bats are classified as “vulnerable” due to the destruction of caves, human disturbance by visiting roosts in caves, and the loss of prey (which is due to a loss of they prey’s habitat). It is estimated that there are only 5,000 ghost bats left. The common name “ghost bat” is attributed to the bat’s white appearance when looking as it flies over head. Natural predators of the ghost bat are few. Ghost bats can be heard making excited twittering noises.

Roosts can be found in caves, deep rock crevices, and old mines. Although ghost bats prefer to roost in colonies they currently only roost in small groups at best; this is due to a lack of roosting sites that support larger colonies. It is unusual for there to be a colony of more than 100 bats in one location.
The average head and body measurement of a ghost bat is 100mm, each forearm also measures an average of 100mm. There is no tail and the legs are connected by a membrane to the forearms and to 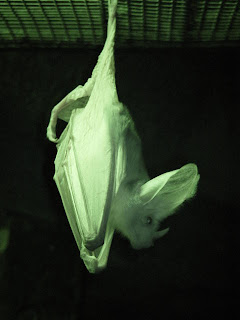 each other. A noseleaf is present along with large ears. There is no fur on the wings. The fur on the back is grey. White fur dominates the underbelly, the bottom of the arms, and the face (except the nose and ears where there is no fur).

Ghost bats are the only bats in Australia that are carnivores. The diet of a ghost bat consists of other bats, small mammals, larger insects, birds, and frogs. Ghost bats are quick when descending on prey and uses powerful jaws to kill it. Once the prey has expired, the ghost bat will take it to another location to eat it. Prey can be found through sight and sound (particularly echoes).

Males and females live in separate colonies during breeding season. Females can only give birth to one young each year which is usually born sometime between July and September. Milk is given to the young until they can eat meat, at that time the mother catches prey and feeds it to the baby.
Posted by The Green Planet