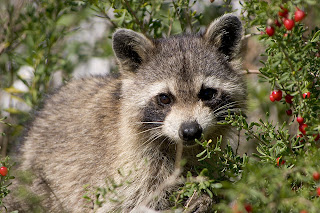 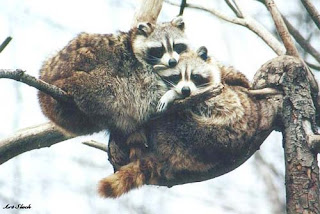 Habits
Raccoons are primarily inhabitants of broadleaf woodlands, although they are rather common in the mixed-pine forests of southeastern Texas. They seldom occur far from water, which seems to have more influence on their distribution than does any particular type of vegetation. Still, they are one of the most abundant carnivores in the semi-desert areas of West Texas.

They are strictly nocturnal and seldom are seen except when hunted with dogs or caught in traps. Their fondness for water is well-known and, except in seasons when fruits, nuts, and corn are maturing, they do most of their foraging near or in bodies of water. They often make well-worn trails at the water’s edge where they have been searching for food. 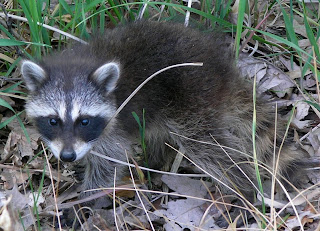 The den is usually a large hollow tree or hollow log in which the animal spends the daylight hours sleeping and in which it also rears its young. In the western part of the range, dens usually are in crevices and crannies in rocky bluffs, but hollow trees are used when available. Several unusual nesting sites have been reported in the literature. In eastern Texas, a female and her three newborn young were found in a nail keg that had been fashioned as a nest site for wood ducks and wired 5 m up in a tree standing in water some 6 m from shore. A young raccoon was seen using a crow’s nest some 6 m up in a willow tree as a daytime bed. Near Parker, Colorado, a raccoon and her naked and blind young occupied a large magpie nest located about 4 m above the ground in a scrub oak.

In the colder parts of their range, raccoons are said to "hibernate" during periods of inclement weather. This appears to be mere "holing up and sleeping," and not true hibernation. Raccoons do not exhibit the marked physiological changes — reduced temperature, reduced rate of respiration and heart beat, insensibility to pain — that characterize true hibernation. 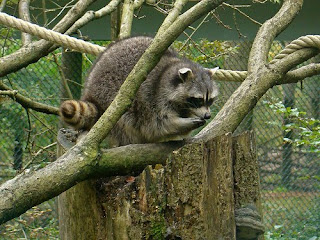 The crushing type of molars indicates that raccoons are not specialized feeders. Stomach and fecal analyses bear out this assumption. In eastern Texas, acorns and crayfish constitute more than half their yearly diet and both are consumed in considerable quantities at all seasons. Grapes and persimmons are utilized when available and other fruits in smaller amounts. Insects and other invertebrates form an important part of the diet. Fish, birds, and snakes are taken occasionally. In summer and early autumn raccoons develop a fondness for adult and larval wasps and their stored foods. In winter they concentrate in the river bottoms and subsist largely on acorns and crayfish.

The breeding season begins in February and continues through August. The single litter of one to seven (average three or four) young usually is born in April or May after a gestation period varying from 60 to 73 days (average, 63 days). Raccoons are promiscuous in their sexual relations.

At birth, young raccoons are well-furred and have dark skins, no rings on the tail, and the eyes and ears are closed. The eyes open between the 18th and 23rd day. The mother alone tends her youngsters, and when they have grown large enough to leave the den site they follow her about, seeking shelter when necessary in tangles of roots or vines, in crevices, or under rocks. The family group remains intact long after the young ones have been weaned. The young do not reach adult size until their second year but females, at least, reach sexual maturity when 9 or 10 months old; males appear to mature sexually when about 2 years old.
Posted by The Green Planet