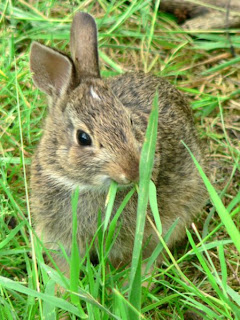 Distribution
Occurs throughout eastern three-fourths of the state and in some areas of the Trans-Pecos.
Habits
Like other cottontails, this one is a denizen of brushland and marginal areas and seldom ventures far from brushy cover. In central Texas, it commonly frequents brush-dotted pastures, the brushy edges of cultivated fields, and well-drained streamsides. Occasionally, it inhabits poorly 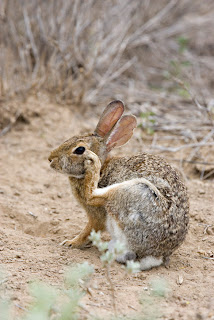 drained bottom lands with the swamp rabbit. In many places it is common along country roads, especially where the sides are grown up to dense vegetation and adjoining areas are heavily grazed or farmed.

These cottontails are active largely in the twilight hours and at night, when they venture to open pastures, meadows, or lawns to forage. They frequently live in the edges of towns and feed in gardens and flower beds. In the daytime they rest in beds in nearby thickets or in underground burrows and small culverts. On the coastal prairies of Texas, a population density of one cottontail to 1.8 ha is not unusual.

The food is variable with the season. They feed on a variety of grasses and forbs but when such vegetation is scarce, they eat the twigs and bark of shrubs and small trees. These rabbits are not sociable and are seldom seen feeding together.
Eastern cottontails are prolific breeders. In southern Texas the breeding season is year-long, although the frequency of breeding does fluctuate throughout the year. 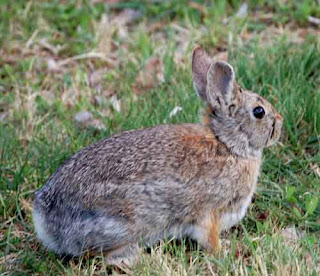 Breeding activity is stimulated by environmental factors, such as temperature and rainfall, which affect the growth of vegetation. As many as four or five litters of one to eight young (average, four) may be reared yearly. The gestation period is 28-29 days. The young are blind and helpless at birth, but grow rapidly; when 4-5 months old they are distinguished from adults only with difficulty. Young females born early in the year may mature sexually and produce young in their first summer but ordinarily, they do not breed until their second summer.

These cottontails are known to be preyed upon by hawks, barn owls, opossums, coyotes, foxes, and weasels. Doubtless, many others can be added to the list. 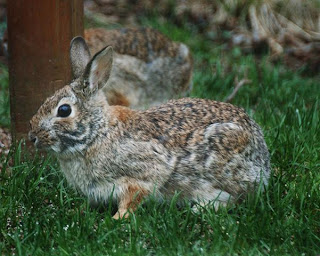 Remarks
Previously, cottontails from mountainous areas of the Trans-Pecos, including the Guadalupe and Chisos Mountains, were regarded as a distinct species (Sylvilagus robustus). Based on only nominal cranial differences with S. floridanus, these rabbits are now considered merely a subspecies of the eastern cottontail, S. f. robustus.
Posted by The Green Planet