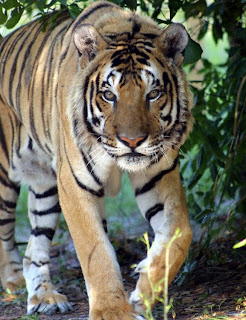 The Sumatran tiger (Panthera tigris sumatrae) is a big mammal, carnivora that has the darkest colors of all tigers and it has stripes on its legs which the Siberian does not have. The stripes are broad and closely spaced together and often times doubled. Their coat is orange to reddish-brown.
The Sumatran tiger (Panthera tigris sumatrae) is the smallest of the subspecies of tiger. This species is found only on the Indonesian island of Sumatra. About 350-500 of them are believed to roam the lowland, mountainous forests.
Sumatran male will measure an average of 2.4m from its nose to the tips of the tail and weight between 100-170kg. Food: Deer, Wild Pigs, Rusa (big deer) , Muntjak (small deer) or barking deer.
The Sumatran tiger is very well represented in zoos all around the world and are part of extensive breeding programs as well. Captive populations are sometimes supplemented with wild tigers captured because they became a hazard to human life in their ever-shrinking surroundings or rescued when injured to the extent that they cannot be returned to the wild.
The gestation period for the females is approximately 103 days, she can have 1-5 cubs per litter but on average it is usually 2 -3. The cubs join mom hunting after about 8 weeks, they learn how to kill in 6 months and can hunt for themselves at one and a half years of age. 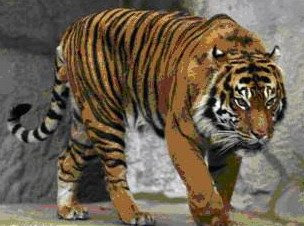 Like all the tiger, the Sumatran is critically endangered because of hunting and habitat loss-there are as few as 350 left in the wild today. Deforestation (due to illegal logging) of their natural habitat is the biggest threat to these beautiful animals and a recent study suggests that the Sumatran tigers will be extinct in the wild by the year 2014, less than 12 years!
Today the greatest threat to the Sumatran tiger is MAN. In Sumatra, tiger habitat is shrinking fast with timber resources being exploited on a large scale. So if we keep destroying the habitats, they will be gone as dodos. To help conserving them, you can join organizations that protect these tigers, like the Indonesian WWF
The Sumatran tiger (Panthera tigris sumatrae) has many advantages to survive with their special anatomy: 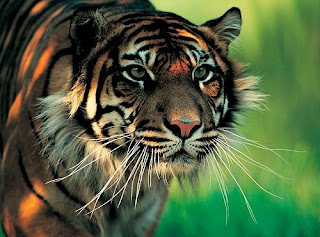 Cheek tufts-can protect them from branches and twigs. Eyes-they are mostly nocturnal and so are well adapted for seeing in the dark. Their night-time vision is very good: At night they can see 6 times better than we can. Teeth-Tigers have the largest canine teeth of any land-based carnivores.Tongue-covered with sharp "Papillae" (little raised pimples) which help them take the skin off flesh. Paws-their feet are well haired around the pads so they can silently stalk their prey. Claws-All cats have sharp claws, but Sumatrans have retractable claws. Limbs-A good agile climber, with good balance its hind legs are longer than their front, this enhances their ability to jump and pounce. Tail-the tail is half as long as their body. Movement-Tigers are very fast quadrupeds (four-legged animals). Unlike most cats, tigers are very good swimmer and like the water. Webbing between the cat’s toes helps them swim faster.