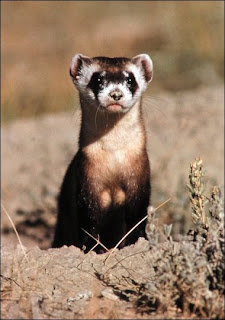 Description
Black-footed Ferrets are buckskin-tan in color with distinctive body markings, including a black face-mask, dark “saddle” on the back, black feet and legs, and a black-tipped tail. Thebreast and stomach are light tan to cream in color. Adult ferrets range in total length from 18 to 24 inches. Their tail is approximately one-quarter the length of the body. The ferret is a member of the weasel family.

Black-footed Ferrets can be confused with the smaller Long-tailed Weasel. Adult Long-tailed Weasels are about 12 to 20 inches in total length, and have a proportionately longer tail, nearly half or more of body length. The southwestern color phase of the Long-tailed Weasel is brown in
color with yellowish-white underparts and white patches on the forehead and below the ears. These weasels have a black tip on the tail but do not have black feet. Southwestern Long-tailed Weasels are sometimes referred to as “bridled weasels.” Black-footed Ferrets can also be confused with domestic European Ferrets, which are sold as pets. These animals have long, coarse guard hairs and a completely dark tail. They may have a faint face mask. European Ferrets are yellow to black in body color and often have black legs. Their muzzle is more pointed than that of the Black-footed ferret.’

Habitat
The Black-footed Ferret once inhabited extensive area s of the Great Plains ranging from the foothills of the Rocky Mountains east to Nebraska and from southern Canada south to Texas. Ferrets rely on prairie dogs for food and shelter. Because of this, active prairie dog colonies provide potential habitat for Black-footed Ferrets. It is estimated that over 100 million acres of western rangelands were occupied by prairie dogs in the early 1900’s. Early accounts of huge prairie dog towns are common. For example, Ba iley in 1905 recorded an almost continuous prairie dog town extending in a strip about 100 miles wide and 250 miles long on the high plains of Texas. Until about 60 years ago, pra irie dog colonies provided a nearly continuous patchwork
of ferret habitat, interrupted only by areas of undisturbed rangeland, mountain ranges, and large rivers. 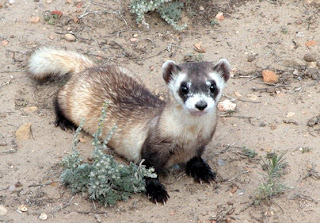 Historically, the range of the Black-footed Ferret coincided closely with the range of prairie dogs throughout the Great Plains, semi-arid grass-lands, and mountain basins of North America. Based on written accounts and specimens collected since its identification, the historical range of the ferret in the U.S. included Arizona, Colorado, Kansas, Montana, Nebraska, New Mexico, North Dakota, Oklahoma, South Dakota, Texas, Utah, and Wyoming, in addition to the Canadian Province of Saskatchewan and the Mexican State of Chihuahua. Black-footed Ferrets may have occupied nearly all adequate prairie dog habitat available to them regardless of prairie dog species, vegetation, soils, or climate.

In Texas, the Black-tailed Prairie Dog historically occurred throughout the High Plains, Rolling Plains, and Trans-Pecos regions, occupying 78 counties. Today, the largest active prairie dog colonies in Texasoccur in the Panhandle, although some areas in the Trans-Pecos alsosupport large prairie dog towns. Colonies also exist on public landssuch as the Rita Blanca National Grasslands in Dallam county, Muleshoe National Wildlife Refuge (NWR) in Bailey county, and Buffalo Lake NWR in Randall County. Based on a survey conducted by TPWD it is estimated that about 170,000 acres of prairie dog towns still exist in Texas. 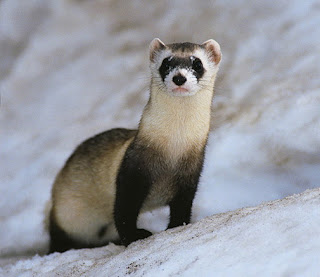 Life History
Black-footed Ferrets hunt primarily at night, so they are rarely seen. They live in burrows made by prairie dogs. Prairie dogs comprise about 90 percent of the ferret’s diet, although they also eat rabbits, mice, voles, ground squirrels, pocket gophers, birds, andinsects.

Little is known regarding the life history of Black-footed Ferrets in the wild. Only two populations have been studied; one in South Dakota and one in Wyoming. From the study in South Dakota, we know that a ferret family consisting of one female and young require a minimum of about 100 acres of prairie dog colony. The area required to support a sustainable breeding population of 40 to 60 adult ferrets is estimated to be about 6000 acres of prairie dog towns, either contiguous or located within about 4 miles of one another.

Ferrets do not hibernate and are usually solitary during the late fall and winter. Ferrets have not been observed mating in the wild, but captive ferrets have been observed breeding in March and early April. Captive ferrets have a gestation period of 41 to 45 days, and litter sizes range from 3 to 5. The female alone cares for the young, even though the male may stay in the same prairie dog town. By early July, the young ferrets make their first appearance above ground, usually in the early morning. They begin to occupy separate burrows by late August or early September. By September, young ferrets are nearly full grown and begin to disperse from their birthplace to unoccupied territories within the colony or to nearby prairie dog towns. It is during this dispersal period that the young are exposed to the greatest danger.

Many things can kill Black-footed Ferrets. Predators such as owls, eagles, hawks, coyotes, badgers, foxes, and bobcats are the main cause of death for wild ferrets. Some ferrets are killed crossing roads, particularly during the fall dispersal period. Canine distemper, to which ferrets have no natural immunity, has caused serious losses, especially in Wyoming. Ferrets are probably also susceptible to rabies, tularemia, leptospirosis, mange, and various other infections. 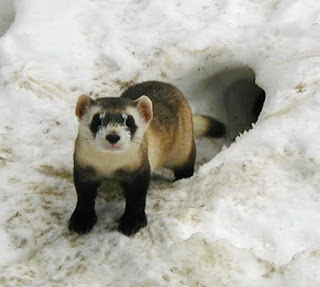 Threats and Reasons for Decline
In Texas, reasons for decline in the prairie dog population, and thus the Black-footed Ferret, include conversion of rangeland to cropland, elimination of prairie dog towns, urban development, and introduced diseases such as sylvatic plague. Sylvatic plague, a disease affecting prairie dogs and other rodents, is a fairly common occurrence in the Panhandle, and is a significant mortality factor in some years. For example, the prairie dog population on the Muleshoe National Wildlife Refuge was nearly eliminated by plague during a two week period in 1974. Although there have been no documented cases of sylvatic plague affecting Black-footed Ferrets directly, the indirect effects of a reduced food supply would certainly have serious consequences.

It is estimated that slightly more than one percent of historical prairie dog habitat remains in Texas. The presence of large, healthy prairie dog towns may not always seem compatible with agricultural grazing interests. Prairie dogs feed on many of the same grasses and forbs that livestock do. They therefore reduce the amount of forage available for livestock, although studies show this reduction may be partially offset by improved nutritional content of forage. The competition bet ween prairie dogs and livestock is a major factor in the human-caused decline of prairie dogs and Black-footed Ferrets. Also, many prairie dog towns adjacent to cropland have been eliminated to prevent crop depredation, which can be significant, particularly on winter wheat. Isolation of habitat may have also contributed to the decline of prairie dogs and Black-footed Ferrets in Texas. The inability of young ferrets to find suitable habitat after leaving their birthplace is a major cause of mortality. Habitat fragmentation affects the exchange of individuals and thus genetic material, which is necessary to maintain viable breeding populations. 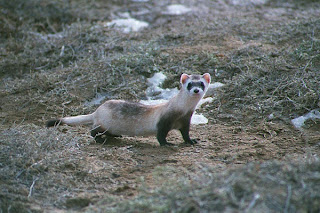 Maintaining prairie dog colonies is vital to recovery of the Black-footed Ferret in Texas. Prairie dog towns are the basis for a unique ecosystem which supports many other species. One study identified more than 140 species of wildlife associated with prairie dog towns. Vacant prairie dog burrows provide homes for Burrowing Owls, Cottontail Rabbits, and various small rodents and reptiles. Birds of prey, such as the Ferruginous Hawk, are attracted by the abundance of small mammals. Mountain Plovers feed on insects and nest in areas of short grass and bare ground. Songbirds frequently appear in greater numbers on prairie dog towns than in surrounding prairie, since seeds and insects are often more abundant and visible. These unique patches of habitat provide for a wide variety of plants and animals, adding valuable biological diversity to the landscape.

Recovery Efforts
State and federal agencies, in cooperation with private landowners and conservation groups, are beginning to reintroduce Black-footed Ferrets to the wild. Reintroduction efforts have begun in Wyoming, and other states plan to follow. The first releases are planned on public land and will be experimental, as researchers learn the best ways to return Black-footed Fer- rets to their native habitat. Research with captive ferrets is attempting to answer the many questions regarding reproduction and behavior. Black-footed Ferrets are also being maintained and bred at several zoos and other facilities around the country. In Texas, efforts are being made to inform landowners and the general public regarding the importance of conserving and managing prairie dog colonies. 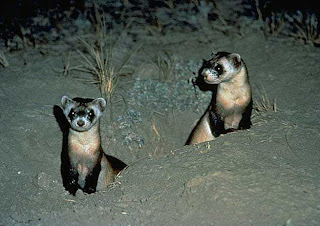 How You Can Help
You can be involved with the conservation of Texas’ wildlife resources by supporting the Special Nongame and Endangered Species Conservation Fund. Special nongame stamps and decals are available at Texas Parks and Wildlife Department (TPWD) field offices, most state parks, and the License Branch of TPWD headquarters in Austin. If you see a Black-footed Ferret in the wild, report it to the Texas Parks and Wildlife Department or the U.S. Fish and Wildlife Service.

If you own or manage land with prairie dog colonies, you can contact the Texas Parks and Wildlife Department or USDA Natural Resources Conservation Service for range and wildlife management recommendations that will benefit your ranching operation and maintain the diversity of native wildlife found on your property.

Management guidelines are available from the Texas Parks and Wildlife Department or U.S. Fish and Wildlife Service for landowners and managers wishing to conserve and manage prairie dog communities

I found this site using [url=http://google.com]google.com[/url] And i want to thank you for your work. You have done really very good site. Great work, great site! Thank you!