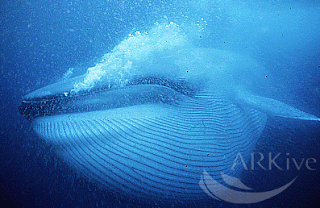 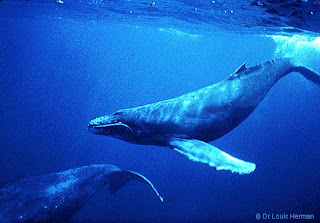 Distribution
Blue whales occur in all oceans of the world. There are only two records from the Gulf of Mexico; one stranded near Sabine Pass, Louisiana, in 1924 and one stranded on the Texas coast between Freeport and San Luis Pass in 1940. Both of these identifications have been questioned, however, and the occurrence of the blue whale in the Gulf of Mexico is problematical. The current worldwide population is only 11,000-12,000, with the current North Atlantic population numbering 100-1,500 animals. Blue whales are classified as "endangered." 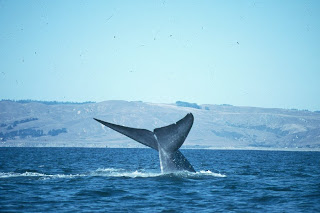 Habits
Spring and summer finds northern hemisphere blue whales migrating northward to arctic feeding grounds. In fall and winter the whales move back to temperate waters where mating and parturition take place. This trend is also exhibited by southern hemisphere blue whales although feeding grounds are in the Antarctic. As the seasons are reversed between the two hemispheres, northern and southern blue whales do not interbreed in temperate and equatorial waters.
Feeding occurs mainly in higher latitudes but is also common during migration. In the North Pacific, for example, blue whales stop to feed off California every fall of the year, on their way towards northern waters. Small, shrimp-like crustaceans known as "krill" predominate in the diet, tremendous amounts of which are required to sustain a single whale. An adult blue whale must consume about 3,000-5,000 kg of krill daily to meet its energy requirements. 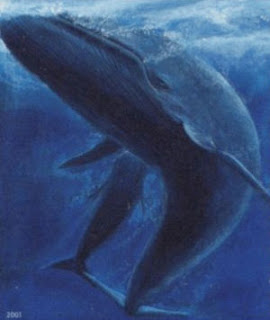 Female blue whales give birth to a single calf in temperate or equatorial waters during the winter months. Gestation is about 11 months and females bear young every other year. The birth of a blue whale has never been observed, but records from past whaling activities indicate that a newborn blue whale is about 8 m in length and weighs 2-3 metric tons. The baby whale nurses for about 8 months and during this time gains 90 kg per day, or 3.75 kg per hour! Sexual maturity is reached at 5-6 years and the lifespan is unknown.
Illustration credit: Pieter A. Folkens.

Other source about blue whales
The blue whale (Balaenoptera musculus) is the largest mammal found on the planet, perhaps the largest mammal that has ever lived, thought to be even larger than even the largest of the dinosaurs. It belongs to a family of animals known as the rorquals and is termed a baleen whale. Unfortunately, it is currently listed as endangered and was hunted nearly to extinction by the 1960s when hunting was finally banned. The current population of the blue whale is only estimated to be about 12,000 total.

The blue whale is a grayish-blue in color with lighter gray spots across its skin. It has a tiny pointed dorsal fin, located low on its back. The average length is about 75-80 feet (22-24 meters), but the female, the larger of the species, can grow in excess of 80 feet and can weigh over 100 tons.
Blue whales are found all over the world. They migrate to warmer climates in the winter, in tropical and subtropical locations, and frequent colder locations, like the poles, in spring and summer. They usually travel in very small groups, often traveling alone, and can swim very quickly, sometimes reaching speeds of up to 30 miles per hour.
Blue whales eat by filtering food from the water through plates called baleen in their mouths that take the place of normal teeth. They have large pleated grooves on their underbellies that expand, allowing the mouth to take in huge amounts of water, which is pushed through the baleen, leaving the food behind. Their diet consists mostly of plankton and krill, which are small invertebrates that resemble shrimp. The blue whales can eat over 4 tons of these tiny creatures per day during their summer feeding season.
Female blue whales give birth to their young about once every two to three years after a year-long gestation. The baby whale, or calf, is nursed by the mother for the first six to eight months of life and then is weaned but will often stay with the mother for at least a year. The whales reach sexual maturity at around 10 years of age and usually live for 35-40 years, although some records indicate that they may live as long as 80 years.
Blue whales were once termed “sulfur bottom” by the earliest whalers because of micro-organisms and algae that grow on their underbellies, giving a yellowish appearance. They communicate with each other verbally, using small moans, clicks, and buzzes, but they are also considered the loudest animal on earth, able to emit a noise over 150 decibels, which can be heard for hundreds of miles underwater.
Posted by The Green Planet